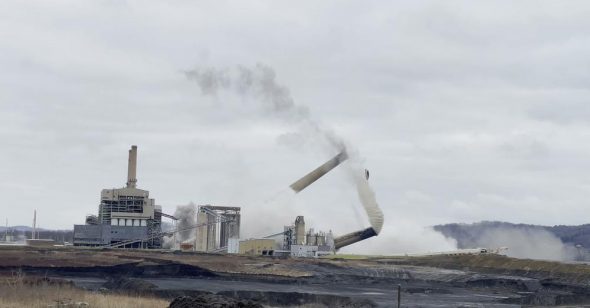 Three towering concrete stacks that were the most visual reminders of Conesville’s defunct coal-fired power plant came down Sunday morning, the next step in creating prime space for the development of a new industrial park.

The 805-foot structures loomed over the Conesville Power Plant, a 2,085-megawatt power generation facility, which closed in April of last year. Standing since 1957, the towers were a symbol of economic stability from a plant which, at its peak, employed 525 people and 150 contractors.

The long-anticipated demolition, an important milestone in the site repurposing process, comes at a time when prospects across the United States are taking notice of Conesville, located 70 miles east of Columbus in Coshocton County. Investors are visiting regularly to consider the site for a variety of business and manufacturing uses, according to Franjoine.

“As the stacks come down in Conesville, it is a bittersweet moment for the community. While many may miss the long-standing physical presence of this prominent community landmark and what it represented, today is a very exciting new beginning and revival in Coshocton County. I recently had the opportunity to tour the site of the facility and to visit with the new owners and their senior management, who have game-changing plans for the remediation, restoration, rebuild and revitalization of the property,” Ohio Senator Jay Hottinger said.

Marge Donley, Mayor of Conesville, also remembers the Conesville Power Plant stacks as an image that has defined the Village’s public image.

“My young grandsons have always known when we were close to home while traveling in the car. As soon as they saw the stacks, they knew it was just a few minutes until they were home. The landscape will definitely change without the vision of the stacks. The Conesville Power Plant provided stability in our community that I hope to see return with The Frontier Groups of Companies plans to revitalize the land,” she said.

Business Development Director Pat Ford, Frontier Group of Companies, said that as the AEP Conesville repurposing project moves forward, the plan will include an end game based on Frontier’s extensive experience with the redevelopment of brownfields.

“In some cases, factories and retired power plants have been closed and left abandoned for years or decades, creating blight while representing stark reminders of missed opportunities,” Ford said. “While our demolition crews do their work to revive the property, our role is to engage the community and conduct a market analysis to help clarify the vision for redevelopment. This site has the benefit of a great location and existing infrastructure and is nestled in a labor pool that is complete with a ready, skilled, and reliable workforce.”